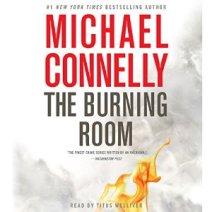 I suspected I wasn’t going to be all that happy with the newest Harry Bosch novel – the reviews were mixed and  I don’t like the narrator’s’ deep, deep voice.  But I’ve kept up with and mostly enjoyed the tales of Michael Connelly for many years, so now is not the time to quit.

Anyway – this time we have a newly dead man who was the victim of a shooting occurring over 10 years ago – the poor guy just finally died of blood poisoning from the gunshot.  Fortunately,  there is surveillance footage of the crime scene – a Latino nightclub –  which Bosch and his new partner,  a rookie named Lucia Soto, check that out carefully.   Bosch is not too sure about Soto.  She seems to be hiding information and,  oddly enough, the shooting had something to do with a fire which affected Soto’s old neighborhood and friends. And there are anonymous phone calls tips.

Meanwhile,  Bosch’s daughter continues to grow up, is getting ready for college and doing well while Bosch is between women so that leaves the bulk of the book to crime-solving.

Because Bosch is older and maybe is a bit less defiant, although certainly not mellow,  and because this is Connelly’s 19th book in the series,  I have a feeling we might be seeing Harry actually retire very shortly –

2 Responses to The Burning Room