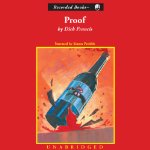 Dick Francis is an old standby for me – I started reading his books in the 1980s, I think,  and every once in awhile I just have the urge.  I don’t read series all in a  quick row and Francis’ books aren’t series although they all have to do with  the world of horse racing.   Frances knows whereof he speaks about that subject – he was a champion jump jockey. After he retired from the racing world he wrote 42 or so books on his own,  another 4 with his son, and the last 3 have his name on them,  but were by his son.

In Proof,  the protagonist is Tony Beach, a wine merchant who has customers in, and family connections to, the racing world.  One day,  while Tony is serving his product for a racing society bash,  a large horse trailer slides down a hill and crashes into the party tent killing several people.  And as if that isn’t enough,  rumors are circulating that some of the local clubs and  stores are selling inferior wine and whiskey from bottles with premium labels on them.

All this adds up to a great suspense/thriller novel as Beach works with the lead detective in  tasting wines and getting himself in lots of danger.  Beach is  also working on some personal grief which came to the fore after the fatalities at the party.