In the mid-15th century a Turkish sultan named Mehmed conquered Constantinople and much of the rest of the area .  In 1480  Gentile Bellini the Venetian painted his portrait while visiting the area in a diplomatic effort between the two cities. The portrait stayed with the Sultan but after several years it went missing. 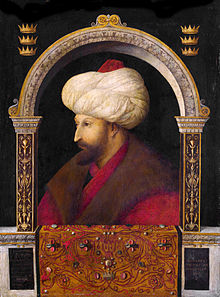 The working hypothesis in the Empire of the 1840s is that perhaps Bellini’s painting has turned up in Venice – it’ said to have been seen there.   Sultan Abdülmecid wants to know and he wants it back – without cost.   So he sends Yashim the Eunuch to fetch it.  But Yashim is not so interested in going to Venice – it would be far too dangerous for a Turk to be seen in Venice.  So Yashim sends his friend Palewski, the Polish Ambassador, to check it out.

Palewski lands in Venice where crime abounds and many art dealers are crooks – perhaps a murderer in their midst.

This might be a very dangerous mission so Yashim sends his old friend, the Polish ambassador Palewski, in his stead. And Palewski also worries so he takes the name of one Signor Brett, an American art collector. But when Palewski gets to Venice a con artist named Antonio Ruggiero who says he is a ‘friend of visitors to Venice’.

Ruggiero gets Palewski/Brett to various hustlers – Carla a beautiful blonde swordsman, Maria a woman of the court, and other. Meanwhile, Brett is suspected of having something to do with the murder of two local art dealers. Palewski is in serious trouble.

Fakery, treachery and innuendo are everywhere along with numerous nationalities and ethnic groups.   As Brett gets deeper into trouble and is sought by the police the story switches to what Yashim is doing and it looks like he has to visit Vienna himself – in spite of the danger.

This is a great little video clip made by Goodwin about the Istanbul of his stories.: http://www.youtube.com/watch?hl=en-GB&gl=GB&v=bVK3yoXTmQY