I was NOT looking forward to this book selected by one of my groups but I don’t know why not – it’s just the “type” of historical fiction I’m not fond of – the kind where the historical setting is presented but it really doesn’t seem to drive the characters in any way,   the history just happens around them.   Yes,  I suppose that’s a fine line,  but it’s  important to my enjoyment.  Oh well … at least we’re not seeing history as “background” for novels which could take place anywhere and any time.  I think the thing is that the historical part didn’t change – it’s just a setting.

Then another group decided to read it – oh woe!  I’d better read it then,  see what I make of it.  So I started listening to the audio version (and I’m not usually fond of Davina Porter) and it was just sliding by as I walked along and I realized I was hopelessly lost.  I started over –

Eeeks!  This time something was clicking – really clicking!  (See how fickle I am?) I started making notes about the Epigraph and checking out the location – then I decided to look up the Kindle version and found that it was a very good price so … ta-da … here I am reading and listening –  both.  🙂   I’ve done that before not too  long ago, actually,  with Station Eleven by Emily St. John Mandel – turned out well.  So I guess I’ll get the Kindle version here too – That way I can walk and listen,  but if I miss something I can check the text version.  🙂

Setting – Amsterdam in last half of the 17th century – the VOC – Dutch East India Company – is experiencing incredible success trading throughout the world. – Fwiw, Amsterdam at this time had recently peaked in its notorious economic growth and was now suffering an economic downturn – a variety of reasons were involved including  population changes, corruption,  economic interests of the powerful changed from trade to real estate and investing.  Johannes Brandt is apparently involved in both trade and investing.

The truth is I kept getting involved in researching the times –  too bad it wasn’t really integrated into the action.

Yes, there really was a Petronella Oortman who married a shipping and trade magnate named Johannes Brandt.

Epigraphs from Nahum 2:9 and Mark 13:1-2 in the Bible – destruction – from Brandt household Bible.

Take ye the spoil of silver, take the spoil of gold: for there is none end of the store and glory out of all the pleasant furniture. Nahum 2:9

1And as he went out of the temple, one of his disciples saith unto him, Master, see what manner of stones and what buildings are here!

2And Jesus answering said unto him, Seest thou these great buildings? there shall not be left one stone upon another, that shall not be thrown down.

I set them out here because I want to remember they’re there – the text also says they were “from marked passages in the Brandt household Bible.” –  might be important for themes.

The Plot – (no spoilers past 1/4):   1686 – (a year prior) – the 18-year old Petronella (Nella) Oortman arrives at the upscale home of her new husband, Johannes Brandt who is 39 years old and quite prosperous – or it would seem so. Nella is finally greeted by his sister, Marin Brandt as well as Otto, the dark-skinned manservant from Africa,  and Cornelia, the maid apparently from an orphanage.  Nella has a parakeet with her and a small trunk.  The Bible is quoted liberally by Marin, the mistress of the house until now,  and she’s apparently a strict and thrifty woman – probably jealous, no doubt a challenge to Nella.  And Johannes is not there – not until the next day and when he does get home he doesn’t seem that interested in her.

See http://education.nationalgeographic.com/education/media/dutch-dollhouse/?ar_a=1
for an excellent close-up photo of the original and a really huge one here:  http://triantafylloug.blogspot.com/2012/05/bernier-eliades.html

Johannes and Marin are primarily interested in business (the East India Company and the Bourse,  the oldest stock exchange in the world – 1608)  and making and keeping money,  although it seems Marin encourages her brother to stay more.   Nella is a bit frustrated.  And so it goes – after several chapters Nella receives a cabinet dollhouse  the very image of the house she’s living in.

And she goes to visit Marin’s rooms where she finds spicy smells,  feathers, books, many things and she realizes she’s not really the “mistress” of the house.  But she finds a note in a book – a love note – in two hands. And Marin catches her and leaves a vicious scratch on Nella’s arm.

The amends apparently includes a book of business advertisements (Smit’s List) as well as a handful of promissory notes.  Nella finds a miniaturist and orders some little things for her cabinet which Marin and Johannes will not like.

Now we have two threads – 1.  who is sending such intimately detailed miniatures?  Nella ordered three but received six – and the miniatures are perfect down to a spot on the dog’s stomach.

2.  Where is Johannes’ heart if it’s not going to Nella?  He’s not taking any interest in her presence as a “wife,” in fact he rejects her amorous advances.   Is it with his sister, Marin?  With Cordelia the maid?  Or with Otto, the manservant?  It’s possible it could be Agnes, Marin’s friend and busy-body gossip – or even (gasp) more than one.   There are hints throughout.

And a minor issue:  What’s the deal with the sugar distribution being held by Johannes and loathed by Marin but it’s profitable.

For some reason the whippets, Dhana and Rezeki, are becoming important in the book.  It’s pointed out that they have weird names –

“Beneath the sun, a motto has been engraved: Everything Man Sees He Takes for a Toy.
“‘Thus is he always, forever a boy,’ ” Cornelia says wistfully.  (p. 63)

Is this referring to Johannes who can apparently buy anything he wants including a slave and a wife?

Anachronism  sighting (minor!):  Page 104 – No matter how rich they were,  Amsterdam did not have shop windows in the 17th century.  Shop windows were first used in London in the 18th century.   The goods listed were likely available for sale in the buildings there along the Warmoestraat,  a famous shopping street in the day – but not behind windows.

And sometimes listening to a British accent is difficult for me –  In this book Johannes sounds like “your highness” and  “guard”  like “god.”  That’s just a sample.

Pellicorne (Pellicone) was a typical if not common name in Amsterdam at the time as were Meermans and Brandt.  Oortman is common today. 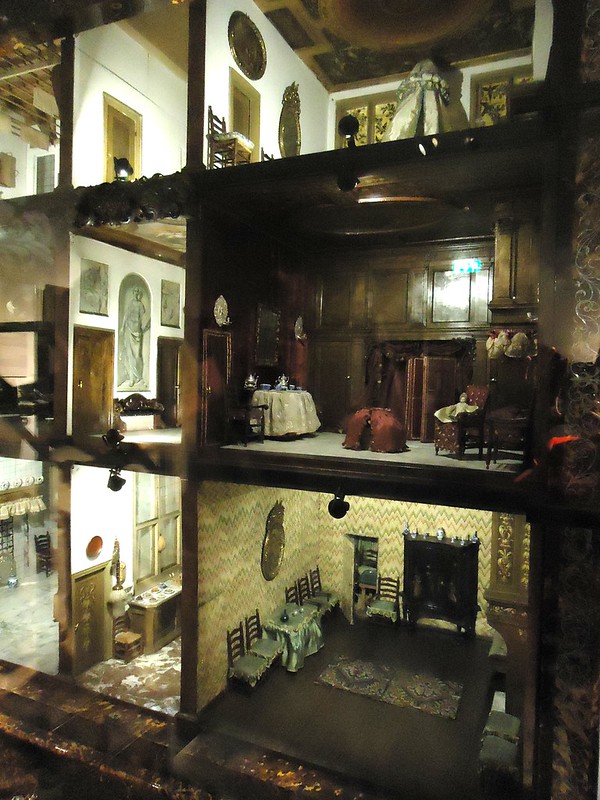 Good stuff here but you have to register:

2 Responses to The Miniaturist – notes