The End Of Your Life Book Club

This is basically a book-lover’s memoir of a wonderful woman who read a lot of books and helped a lot of people.    Will Schwalbe is the son of  Mary Anne  and  Douglas Schwalbe,  Harvard professors and generally of upper class Boston and Massachusetts circles.   Will and his mother had always shared a love of books,  but when she was diagnosed with pancreatic cancer and started the treatments their reading became a joint venture.  Now they began discussing what they read more formally,  like a book group,  than simply recommending them to each other.  About a  year after her death he wrote a book about her last year plus,  and the very personal little book club (2 members) which bound them.

As the book progresses,  the disease which ultimately kills Mrs. Schwalbe also develops, albeit slowly,  but she keeps going as long as she can,  going to treatments but still doing good deeds,  giving of herself,  living life and,  of course,  reading books.

Jeff Harding did an excellent job with the narration. I’ll be glad to look for more by him. 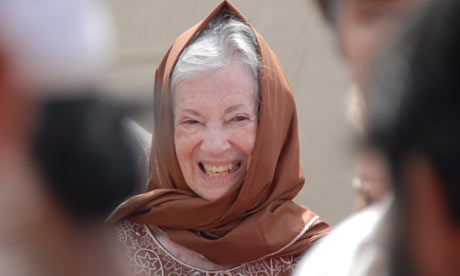 10/04/09:
Mary Anne Goldsmith Schwalbe, who had a distinguished career as an educator and an advocate for refugees, died of pancreatic cancer in New York city on September 14, 2009. After graduation from Radcliffe in 1955, Mary Anne studied at the London Academy of Music and Drama. Returning to New York, she worked in the theatre, then moved to Cambridge and a position in the Radcliffe Admissions Office. Later, she became the Associate Dean of Admissions and Financial Aid for Harvard and Radcliffe and was the first woman to serve as the President of the Harvard Faculty Club.

In 1979 Mary Anne returned to New York City. She held administrative positions at the Dalton and Nightingale-Bamford schools. A 1989 trip to Thailand to work in a refugee camp began her commitment to the cause of refugees. She was a founder of The Women’s Commission for Refugee Women and Children and The International Rescue Committee of The United Kingdom. Throughout the remaining years of her life, Mary Anne traveled extensively on behalf of refugees, often to war zones.   In recognition of her work, she was awarded an honorary Doctorate of Laws from Marymount Manhattan. She is survived by her husband Douglas, children Douglas, Will and Nina, and five grandchildren. Classmates might want to read the blog which Will Schwalbe dedicated to his Mother’s last year of life: look on the web for “Will’s Mary Anne Schwalbe News.”

Another from the NY Times:

And a long piece in “Two Roads Books”

*
They shared some good books – I was familiar with many but not all of them.   The books Mary Anne and Will read and/or discussed:

Crossing to Safety
by Wallace Stegner

My Father’s Tears and Other Stories
by John Updike

The Master
by Colm Tóibín

A Prayer for Owen Meany
by John Irving

The Price of Salt
by Patricia Highsmith

The Savage Detectives
by Roberto Bolaño

The Lizard Cage
by Karen Connelly

The Elegance of the Hedgehog
by Muriel Barbery

The Bolter: Edwardian Heartbreak and High Society Scandal in Kenya
by Frances Osborne

Girls Like Us: Carole King, Joni Mitchell, Carly Simon–And the Journey of a Generation
by Sheila Weller

Wherever You Go, There You Are
by Jon Kabat-Zinn

The Tender Bar
by J.R. Moehringer

The Color of Water: A Black Man’s Tribute to His White Mother
by James McBride

Full Catastrophe Living: Using the Wisdom of Your Body and Mind to Face Stress, Pain, and Illness
by Jon Kabat-Zinn

The Etiquette of Illness: What to Say When You Can’t Find the Words
by Susan P. Halpern

Man Gone Down
by Michael Thomas

On Chesil Beach
by Ian McEwan

The Bite of the Mango
by Mariatu Kamara

The Last Lecture
by Randy Pausch

Appointment in Samarra
by John O’Hara

The Caretaker
by Harold Pinter

Fear of Flying
by Erica Jong

Strangers on a Train
by Patricia Highsmith

The Tin Drum
by Günter Grass

The Magic Mountain
by Thomas Mann

Traveling Mercies: Some Thoughts on Faith
by Anne Lamott

Little Women
by Louisa May Alcott

People of the Book
by Geraldine Brooks

The Uncommon Reader
by Alan Bennett

The Year of Magical Thinking
by Joan Didion

Murder in the Cathedral
by T.S. Eliot

The End of Your Life Book Club
by Will Schwalbe